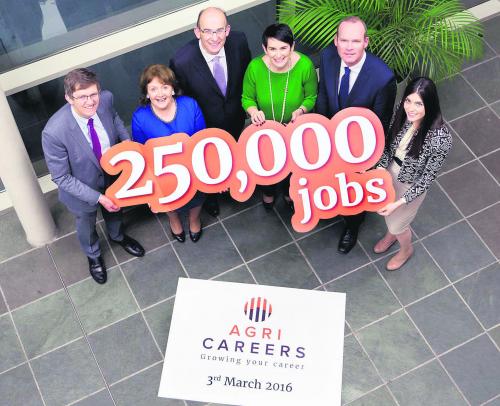 The Irish Farmers Journal and open eir have joined forces to launch Ireland’s first Agri Careers Fair which takes place on 3 March in the RDS.

The event will be a one-stop-shop for a job in agriculture and rural Ireland, as it will showcase some of the 250,000 jobs that are directly linked to agriculture, with real-live roles to be filled on the day.

There will be jobs for those looking for their first role and for those who already have jobs but are looking for the next step and it’s not just agricultural roles that will be available on the day. The sector also needs those experienced and qualified in the areas of IT, accounting, marketing and human resources.

A huge number of the roles will be based in rural Ireland, which is great news for those based in Dublin but who can’t afford to buy a house there and wish to move back home.

For those still deliberating over their CAO choice, there is something for them too as there will also be educational providers exhibiting on the day.

The event was officially launched last week at a gathering of industry leaders in the Irish Farm Centre by Minister Simon Coveney and Carolan Lennon, wholesale managing director from open eir.

Also present at the launch were brothers Jim and Liam Woulfe. Jim is CEO of Dairygold and Liam is MD of Grassland Agro and they will be taking to the main stage at the event, alongside their brothers Michael, Richard and David Woulfe, who all work in the sector too.

They comprise just five of the many compelling speakers who will be speaking on the day.