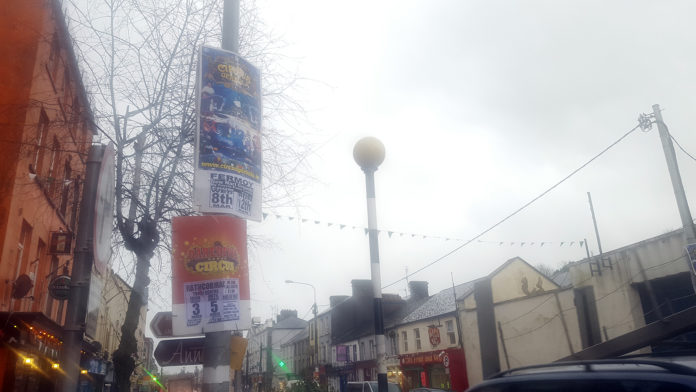 The large number of circus posters that have been erected in Fermoy town over the past few days have been the source of some aggravation for Fianna Fáil local election candidate, William O’Leary.

“I know this has being a hot topic before and some councillors have brought this to the attention of Cork County Council previously. It looks very distasteful. Every pole in Patrick Street, Fermoy is plastered with their posters and some empty buildings as well.”

“The law is absolute nonsense. This in effect gives certain groups a free pass to litter towns and villages because they are deemed cultural. This ridiculous loophole needs amending. The Council needs to write to the Minister of Housing, Planning, and Local Government to demand him to put down an amendment to this act in order for these regulations to be amended and updated in order for the good work of groups like Fermoy Tidy Towns to be protected.”

Mr O’Leary added that with the local and European Elections on the horizon, he hopes that  all candidates will be mindful and respectful about where they will erect their posters, keeping them outside the boundary of towns and villages and respecting Tidy Town Groups.